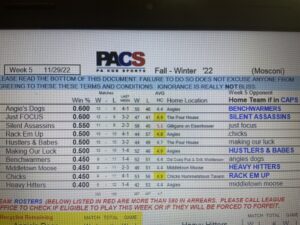 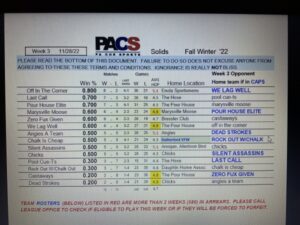 -Limiting the amount of times that your “slow” players play each session.
-Staggering your players each week so that you can balance out your slow players with some players who shoot quickly.
– Starting earlier than 7:00 (if the other team captain agrees).
– Calling out YOUR OWN players as well as the other team’s slow players.
– Telling the opposing team who will be playing the next match so that there is not a lag time between matches.
– Limiting timeouts and when taking one, try to make it quick.

It’s understood that everyone wants to win but keep in mind that this is a recreational league and it is not fair to the other players to make them stay into the wee hours…especially when many of them need to get up early the next day. This will continue to be monitored and if it continues to be a problem, I will CONSIDER (nothing is definite) changes for the upcoming session including but not limited to…

Again, we are not playing for a million dollars here. If a player is a “6” but has to be a very slow player to maintain that “6” skill, maybe they are really a 5 or a 5.5 (if not taking so long to shoot). That’s ok. Try to be considerate of everyone’s time and realize that it’s just a recreational activity. 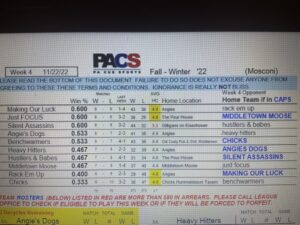