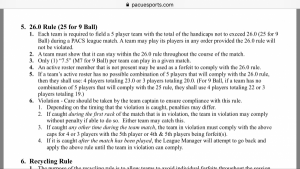 The “25” rule was raised to “26” to give some “wiggle room” for some teams that might get hit harder than others when we went to the new handicapping system (with the “.5” increments). We will not be raising it during the session, next session, or for the Invitational. Time considerations will not allow it. It is also not good for the league as a whole if a handful of teams “stack” their teams so that other teams feel they can’t compete. I strongly encourage teams to work with other teams after the session is over to do trades that will benefit both teams. Some teams would love to have some higher skilled players and would probably be happy to trade with teams that are “stacked”. In this trade scenario, both teams benefit. If a team qualifies for the Invitational, then starts tanking matches before the Invitational in an effort to try to get their players HCs lowered, I will notice it and it won’t work.

If a team or teams qualify for the Invitational but feel they won’t be able to compete (due to inability to meet the “26 rule” or for any other reason), they will have an option to receive a “cash out”. A “cash out” will simply be the AVERAGE NET winnings that the average team would receive for playing in the Invitational. For example, the average team that played in the last Invitational received a NET profit of ($429- $160 entry fee) $269. Receiving $269 isn’t too bad of a deal for a team that maybe is short on players or maybe would just rather receive the “sure thing”.