I made a mistake in my earlier post regarding the matchups for the play-in matches. My earlier post assumed Pool My Finger LOST their match 2-3 which would have made them the #6 seed. In fact, they WON 3-2 thus becoming the #5 seed. I apologize for the confusion and will try to do better going forward.

Next Weeks Play-In matches will be:

Players who have not played at least 6 matches during the regular session are ineligible to shoot in the play-in matches (postseason). 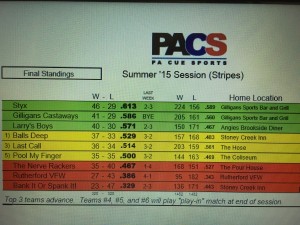