In my travels to league matches, I am frequently seeing shots that are fouls that are not being called.  It is disheartening to me and I question whether people are being dishonest or if they just truly don’t know any better.  The purpose of this post is to better educate people on things to look for that are pretty common fouls. 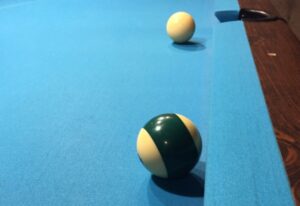 In the above photo, the 14 ball is slightly off the rail.  I will frequently see a player take this shot in which the cue ball hits the cushion first, then hits the 14 ball.  If the 14 ball is hit lightly so that it doesn’t get to the pocket, the 14 ball must hit a cushion for it not to be a foul.  Both players should pay careful attention to these types of shots to make sure that a foul does not occur. 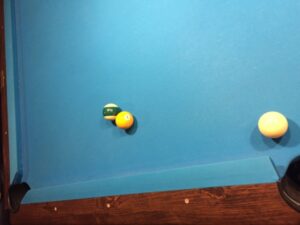 In the above photo, if a player is trying to cut the 14 ball into the pocket and the 1 ball moves, the 1 ball was hit first.  In these types of situations, any potential conflict can usually be avoided by having the non-shooting player simply ask the question before the shot “Do you agree that if the 1 ball moves first, it will be a foul?”  Almost all shooters would acknowledge this to be the case.  If they don’t acknowledge this to be the case, use slow motion video to record the shot to help resolve any possible disputes. 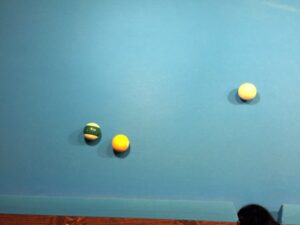 This is similar to the previous example.  If the player is trying to shoot the 14 straight into the pocket and the 1 ball moves, the 1 ball was contacted first.  Discuss this with the shooter ahead of time.  Even though it will be painfully obvious that it is a foul, if a shooter is dishonest or oblivious and says that “they were hit at the same time” AFTER the shot was taken, the call will go to the shooter if there was no slow motion video or if it wasn’t discussed beforehand (that if the 1 ball moves, it WILL be a foul). 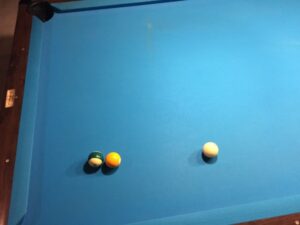 In this above scenario, the shooter is going to attempt to kick the 14 ball into the corner pocket.  90% of the time, it is going to be obvious that it either was a foul or was a good hit.  Nevertheless, it is a good idea to use slow motion video to record the shot because 10% happens more often than you think it does 🙂   I have probably seen this type of shot taken 100 times in which the two players argue on whether the hit was a foul or not.  We have technology on our phones to eliminate these disputes, why not use it?

These are just a few of the more common situations that can occur.  It is better to be proactive by discussing these types of possible conflicts with the opponent and/or using slow motion video than it is to hope that your opponent will be honest or is educated on spotting fouls before they occur.