A Sneak Peek At ACCU-RACE

As previously mentioned, we will soon be adopting a new handicapping system that will provide more transparency and a more fair “race grid”. We have all seen those matchups where (2) 4s are getting ready to play a 3-3 match and everyone is grumbling that there is no way that it should be an even race and that “lousy league operator doesn’t have a clue”. The reason that some matchups seem so lopsided is because one of those “4”s is almost a 5 while the other one almost a “3”. That’s why we will be introducing skill levels that will step in 1/2 point increments instead of full point increments. Beginning next 8 ball session, we will be using a 26 point cap (instead of a 25 point cap). The chart below is a chart that will closely resemble the new chart that we will be using. I am very confident that this will make the races more “fair” to account for situations described above. Note that this is NOT NECCESARILY the final version of the race grid we will be using, but the final version will closely resemble this. Much more discussion to follow at the captains meetings. 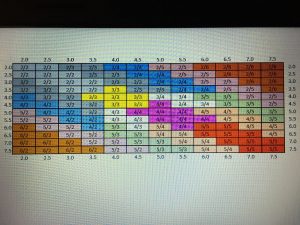 My guess is that about half of the players in the league will start the next session at the handicap that they are currently. And probably 1/4 of the players will move up .5 and the other 1/4 will move down .5.

4 Responses to A Sneak Peek At ACCU-RACE