Teams are reminded that they must comply with the “25” rule. In the event that a team can’t comply with the 25 rule because their team is “stacked” with high handicapped players, below is the explanation of the rule and how the team must proceed. The league office does not deviate from its procedure of handicapping players for teams that have put themselves in the spot that they are having difficulty meeting the 25 rule. It is not fair to the other teams in the league. As has been mentioned before, it is not reasonable for a team to expect that their team can have a high degree of success compared to other teams in the league without having players move up in skill level at some point. Thanks for your cooperation. 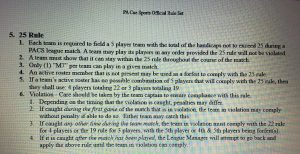